According to a range of testimonies, many Ukrainians helped their Polish neighbors whose lives were in danger.

That help assumed the following forms: warnings about attacks; showing an escape route during an attack; sheltering Poles before an expected attack; misleading the attackers; the provision of first aid to wounded Poles; the provision of food or clothing to survivors; taking care of orphans and children lost after attacks; helping to bury the victims; refusal to carry out an order to kill a Polish member of one’s own family; refusal to participate in an attack; public protest; sparing the lives of Poles; and the release of arrested Poles. Even though it is difficult to estimate the scale of this help, it was real. In 500 localities of the Eastern Borderlands examined in this regard (massacres occurred in over 4,000 localities) the OUN-UPA killed ca. 20,000 Poles. Ukrainian acts of solidarity and mercy saved both individuals and populations of entire villages (several thousand people in total). Over 1,300 Ukrainians are documented as having helped Poles to a lesser or greater extent. Ukrainian nationalists killed several hundred of the righteous as punishment, for all manifestations of friendliness toward Poles were regarded as acts of collaboration with the enemy and betrayal of national ideals, and that called for merciless revenge. 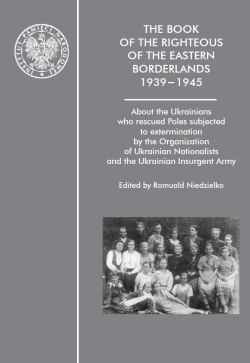